Like many other kids of the day, I learned how to solve the Rubik's Cube in the summer of 1981. Somehow, this knowledge came full circle this past week.

I learned how to do it while working at camp. My friends and I would mix it up and solve it time after time after time and the algorithm was so ingrained in our heads that we would often do the moves with our eyes closed after orienting the cube properly. We worked on full size cubes and the miniature keychain cubes. It got rather out of control. [……]

Honey bun of the century!!!

I was feeling a mite peckish this morning and it was still quite a long time until lunch, so I grabbed some coinage from the retired Altoids tin in which I keep my spare change at work and toddled off to the vending machines. 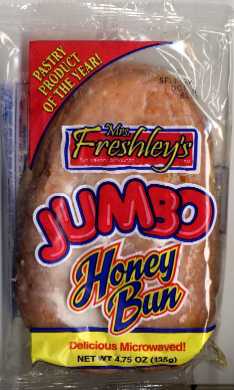 In looking over the available selections, my eyes were irresistibly drawn to this item.  As you can see, it has been named PASTRY PRODUCT OF THE YEAR! and makes no beans about it, as this moniker has been boldly emblazoned in the upper left corner.

We spent last evening celebrating the 90th birthday of the father of one of our friends. It's amazing to talk with someone who has seen the world change so much over the years - someone who remembers when traffic consisted mostly of horses & buggies, who remembers the troops coming home from World War I, who has seen the administration of 16 different presidents. He was married just shy of 50 years and for the majority of his adult life worked in the same job running an ice cream plant. (Any job where you buy sugar by the boxcar is [……]

One of my favorite email newsletters is Mullings by Rich Galen. It's usually political, as that's where Rich makes his real money, but now and then it's just a random stop in his brain. It's one of my favorites for a number of reasons, not the least of which is that Rich actually responds to his email - even the meaningless, little, snide comments that I send him. But the primary reason is that I just love his writing style. Here's a sample:

What the devil is going on in advertising these days?!? I've been seeing some of the most unusual combinations of products and music in commercials lately. The two most glaring examples are Cadillac using Led Zeppelin's Rock & Roll and the B-52s' Roam hawking Clarinex of all things. (Granted - this was from their album Cosmic Thing, which was hardly as cutting-edge-out-of-the-mainstream-and-loving-it as their older stuff -- but still, it's the B-52s!) It should be noted, also, that Clarinex previously used the Overture from The Who's rock opera, Tommy.

Next thing you know we'll have Peter Gabriel [……]

I've been just horrible about not writing anything for the last few days and even then, nothing of any substance. But I am making a vow to myself (and anyone else who might actually read this thing) that I will be posting more regularly starting Monday. [This weekend doesn't allow time as SWMBO, Thing 1 & Thing 2 are involved in a horse show and the vast majority of waking moments will be spent at the Horse Park.] I have a few posts that I've been formulating in my head for [……]

Boy - I must owe some hefty royalties

Just when you think you've seen it all, somebody (Dave Barry, to be exact) points out that there's a patent on getting a cat to chase a laser pointer spot on the wall.

btw - The Laserspot Kitties would be a decent name for a rock band...