Stephen Fry is just too cool 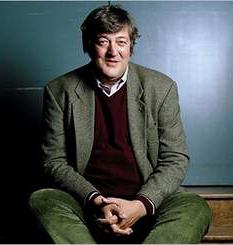 I love it when someone you think you have pegged totally surprises you. The specific case in point at the moment is Stephen Fry , the renowned British actor, comedian and writer who had perhaps his greatest success with P.G. Wodehouse's character Jeeves alongside Hugh Laurie - that's right, folks, House himself. The pair also worked together in a sketch comedy show called A Bit of Fry and Laurie and again in some of the Blackadder episodes.

But in all things, for the most part at least, you always see Mr. Fry as a very proper - not stuffy, mind you, just proper - Englishman. His voice is very clear and distinct and his pronunciation all but impeccable. His audiobook reading of Hitchhiker's Guide is great and I'm looking forward to hearing more audio books from him.

Anyway - I've always liked his work so when I found out that he's on Twitter , I followed him. He's currently on an expedition in the Bwindi Impenetrable Forest in Uganda checking out gorillas and most of his updates have been - well - proper sounding. A prime example is this:

Just about to set off on gorilla trek and -miracle- a signal! Awaiting news from advance trackers as to where group is.

But this morning I woke up, checked the overnight Twitter updates and saw this:

I didn't think I could despise politicians any more than I already did... <<
Useful vs. wasteful   >>