A couple months ago I woke up at 4:30 in the morning thinking about a girl - a girl I haven't thought about in many years. For some reason, my mind wouldn't let go of her memory and I couldn't get back to sleep no matter how hard I tried. Eventually I got out of bed, fired up the computer and did a quick Google search for her name. I was somewhat troubled that there was no information whatsoever about her to be found. None. I decided that there needed to be. 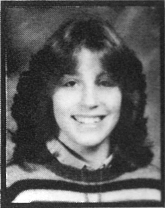 Her name was Luanne Carr and I had known her since seventh grade. To say we were friends would be an overstatement but we were friendly acquaintances. We shared some classes and were in the Chorus together for a few years. She was one of the popular, high profile people and in my schools that usually equated to being in the preppy ranks. She was part of the "it crowd", if such a thing existed back then. But she was universally friendly with just about everyone she came into contact with. She was bright, beautiful and one of those girls who lit up the room when she walked in. Her personality was just as beautiful - bubbly and fun. We joked around a lot and, in my ninth grade yearbook, she wrote

You're one of the funniest people I know and I won't be surprised to see you on Johnny Carson one day.

The Tonight Show still meant Johnny Carson back then.

About halfway through my junior year in high school, I walked into one of my classes - I don't remember which; was it Chorus? - and we were given some horrible news. Luanne had been killed. No details were given but rumors were flying that her mother had shot her - fatally - and then shot herself. But we all know how things like that can get exaggerated quickly especially in the absence of any real facts and, thus, I have no idea whether it is true or not. All we knew for certain was that this bright spot in our day wasn't going to be there anymore. It was a very long, very quiet day. Various people were affected more than others, of course, but our choral room felt like ground zero. I remember a couple months later when we planted a tree in front of the school in her memory. 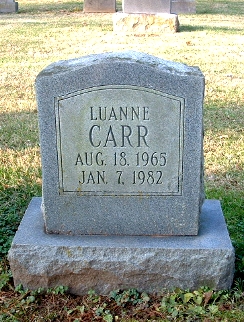 But life moved on and so did we. Fast forward about 4 years to a summer that I spent working on the grounds crew at the main cemetery in town. I primarily ran a weedeater, tailing around behind a mower, trimming around trees and headstones. We would rotate around the various sections of the grounds and, with the notable exceptions of my grandparents and some long-term family friends, the names on the stones meant nothing to me. One day though, when I moved into a new section, I happened upon a familiar name. Memories rolled over me and I just stood there for a few minutes and felt my eyes tearing up. I found myself visiting throughout the summer and, while we were intentional about treating every grave with respect and care, I took extra special care of hers. The job ended with the summer and life moved on again. Eventually those memories faded. Until a couple months ago, that is.

So why, 20+ years later, do I feel the need to write this? Like I said earlier, I think it's a shame that there is nothing to be found online to show that Luanne ever existed. So why should she be any different from millions of others who lived before the internet? Easy - because I knew her.

She didn't get to grow up, go to college, land her dream job, get married, have kids and grandkids. And she didn't get to live through one of the most exciting times to be alive. She never saw the Internet or cell phones. The Space Shuttle had only flown two missions. The Berlin Wall still stood. The DeLorean was still being built, for Pete's sake!

But I don't want this to sound like one of those retrospective roundups of things that incoming college freshman never heard of. As I formulated this post in my head, though, I kept coming back to one point. One thing that encompasses all the rest. Had this tragedy not happened, this vibrant 16 year old girl would be in the prime of her life. She was one of those people who seemed to have it all together. Someone that you just knew was going to accomplish whatever they set their mind to. And while she didn't get to experience all sorts of specific things that have been world changing, the main thing is that she didn't get to live.

And that, I think, is the real reason why this has haunted me since that early morning back in November. Here's this person who will never get the chance to do things that I've glibly passed up the opportunity to do for whatever reason. I was too cautious. Or I was preoccupied. Or I just couldn't be bothered enough to care at the moment. And that is a tragedy of a different sort and something that I have now resolved to try to eliminate from my thinking. And I hope that, if you take anything away from this, it will be one word:

Be in the moment. Smell the roses. Carpe Diem. Whatever other pithy way you want to summarize it, it comes down to this: Live your life and live it fully. Act on impulse sometimes. Go for a walk in the rain. When you get an opportunity to do something - especially a chance that may not come again - think long and hard before taking a pass. And you'd better have a damn good reason if you do. Dance just for fun. Kiss your spouse and hug your kids. A lot. Help other people. Live life - don't let life happen to you. Embrace it and enjoy it because it is all too fragile a gift.

Am I saying to live like you're dying? No. I think that would mean taking unnecessary chances and most of us have people who depend on us and want us to stick around for a while. Rather, really dig into the life you have. Live like you're living!

That's what I'm going to try to do. I'm gonna do it for myself. For my wife. For my kids.

And on this, the anniversary of her death, I'm also gonna do it for Luanne.

[Ed. note -- I'd like to thank April Cain, Tommy Craft and the rest of the folks at Henry Clay High School for their help in getting Luanne's last yearbook picture. I couldn't have done it without you guys. Go Blue Devils!]