Politics is the art of looking for trouble, finding it everywhere,
diagnosing it incorrectly and applying the wrong remedies.
Groucho Marx

One of the reasons people hate politics is that truth is
rarely a politician's objective. Election and power are.
Cal Thomas

Politics is the art of choosing between the disastrous and the unpalatable.
John Kenneth Galbraith

Don't worry. This is not that kind of post. I will not be espousing any candidate or be arguing for any position or ideology. There's plenty of that to be found out there if you want it. Believe me, you won't have to look very hard. I'm more concerned with how we comport ourselves and treat each other, especially those we disagree with.

Last week held the third and (thankfully) final Presidential debate. Now, to be clear, I did not watch it, just as I did not watch either the previous two or the Vice Presidential debate. The reason is simple. They don't matter to me. In fact, I believe that these things are a gigantic waste of time and money, especially in this election where supporters of the two major candidates are so deeply entrenched against each other that they won't be swayed and where undecided voters aren't undecided about which of them to vote for but rather whether to even vote or not.

But many people did watch it and the reactions I saw quite frankly have me concerned for our future — not necessarily as a country but rather as a civilized society capable of reasonable discussion with people we disagree with. Lemme try to 'splain. 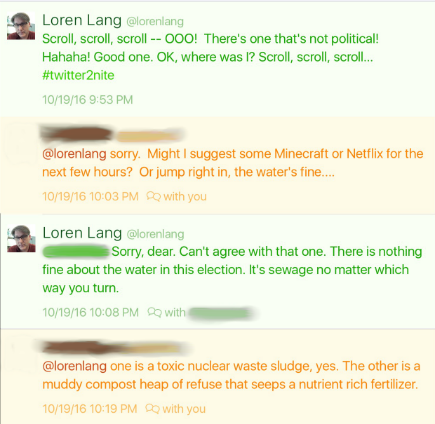 The above is a very brief exchange I had on twitter while the debate was on and I was spending my evening trying to avoid it. Let me start by saying that the person on the other end of this has been a friend of mine for 30 years. She won't appreciate being reminded that it's been that long but, oh well. And I won't tell you which candidate she supports. It was at this point, though, that I decided not to respond because I honestly don't want to get pulled into the morass of a "Better none of the above" argument which is just as pointless as the "Mine's better than yours" argument. Note, though, that this conversation is very polite and is not the sort of thing I'm concerned about.

But here's the deal. My friend has fully bought into her candidate and that's cool. In fact, she had already voted days before the debate happened. I have friends and family on both sides of this election who are just as deeply entrenched. And they shall not be moved. OK. Why then do they watch the debate? They're not interested in hearing the opposing side's point. They're not interested in digging into policy statements or a comparison of the candidates' stances on various issues. Which is good because these debates don't offer any of that anyway — which is why they are a waste. In fact, short of one of the candidates spontaneously combusting on the stage, nothing is going to change their minds. No, the only reason I can see for them being so rapt is that they want to use the opportunity to rail against the opposition. They want fresh meat to chew on when their anointed one points out something about the other one or when the other says something they disagree with. And on Twitter, the barrage is constant. Between their comments and the incessant retweets it just keeps coming. It's non-stop name calling and accusations — sometimes bordering on downright slander. That's in the best of cases. In the worst, I've seen actual death threats aimed at the other side because someone didn't agree with something they said. And I don't really follow all that many people. I can only imagine how bad it is for those who follow several hundred.

This really isn't healthy for us as a country. It feeds an already pervasive divisiveness that only highlights our differences and drives a bigger wedge between us instead of showing us what we all have in common and that we're all in this mess together. Not once throughout this whole two-year ordeal have I heard any candidate or any of their supporters say something like, "You know, that's a good point. I don't necessarily agree with their plan but the goal is a good one." See, that's the sort of constructive disagreement that leads to a better result for everyone involved instead of many years of gloating and supposed moral superiority by one side and grousing and gnashing of teeth by the other. That's unproductive at best and destructive at worst. And the worst part is that the major parties — maybe even the political system as a whole — wants it that way. They benefit from stirring up the frenzy and promoting the discontent. That fills their coffers with donations given in the hope of figuratively pummeling the tar out of the nasty buggers on the other side of the wall. They don't mind that one bit. But it begs the question of just which part of "insure domestic tranquility" they don't understand.

As for me, I think I've made it pretty clear that I don't support either of these two. Frankly, I don't believe either of them has the best interest of most of the country at heart. I think they are both driven by personal gain, either for power or money — most likely both. Not that this is anything new. We've been dealing with the same thing to some extent for decades now. It's just a lot more blatant this time around. If you feel the same or are ambivalent about whom to vote for, consider this. In my state, it's pretty much a foregone conclusion who will win. I, therefore, am voting for a third party candidate and I would urge you to do the same. Or even fourth or fifth party, I don't care. Just not the big two. Not because they are going to win — they're not — but to show support for an alternative to the status quo. The numbers for third parties get bigger every election cycle and I believe that one of these days, there's going to be a perfect storm of dissatisfaction with the existing system and a popular candidate who engages the voters that will prove to be a truly viable choice. That, then, becomes a game changer. In the meantime, I'm using my vote to encourage their continued efforts.

Tags: Life
Vegetables and Broiled Meat <<
Clean as a Whistle   >>