This is just too funny. A Japan Probe article reports about a Disneyland knockoff in China. The funny part is that Disney has nothing to do with it. It's owned by the Chinese government. [Note: The news reports are in Japanese but you can easily get the idea.]

Never mind the fact that they have a mouse with white gloves, large shoes and big ears. They say it's a big-eared cat. And that's another cat in the red polka-dot dress. Hmmmmm.... Where have we seen that dress before? Was it here, perhaps? Oops - wrong link. How about in these two pictures of Minnie Mouse. 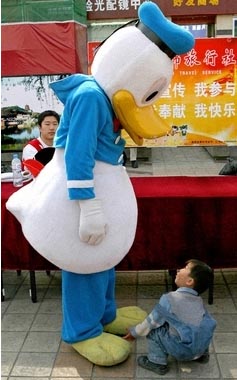 Never mind that they have a duck in a frickin' sailor suit. Or a pseudo dog-like character with long floppy ears and buck teeth (although, to be fair, it doesn't have a hat and looks more like a poor attempt at a platypus.)

Let's not forget the woman with the puffy sleeves and high collar - oh, and those 7 short dudes with hats and beards that, coincidentally of course, seem to follow her around. (And the fact that the folks in those costumes distinctly say the word "Disney" in the interview even though it's all in Chinese.)

The large, green ogre? The stuffed, yellow bear in the red shirt? The large, bouncy tiger? The big castle in the middle of the park? Those are apparently all original ideas.

At least Disney isn't the only one they rip off. There's also a character (which can readily be recognized as a cat) that bears a striking resemblance to Hello Kitty and a big blue thing which supposedly isn't this thing - whatever it is. In fact, it appears that the only thing that is isn't ripped off is the Beijing Olympic Mascot character which nobody outside of China has ever heard of before. Oh - and the one in the pic apparently has it's head on fire. That'll please the kiddies, huh?

The funny part of all this is that it's so very blatant. That's also the infuriating part. And that there's not a lot that anybody with a dog in the fight can do about it. As one of the commenters mentioned, the Disney trademark lawyers would be in a projectile sweat if there was any chance that they could actually enforce a judgment against this place.

Don't get me wrong, I'm far from a Disney fan-boy. I have a long standing love/hate relationship with Disney and, other than the moral side of it, I don't care if their trademarks are thrown into the street and driven over with a truck in protest of lousy IP laws. But I also don't like people who can look into a camera and tell the world a bald-faced lie like the head of this park does. That's the only explanation for it.

Either that, or he's on crack.