I didn't think I could despise politicians any more than I already did... 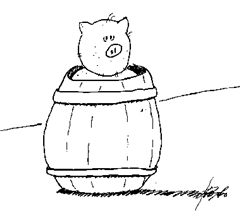 Boy, was I wrong! The latest comes in the form of this $700B crap sandwich that they've sold as the only way to save humanity. Not only is it a lousy attempt at a solution that won't work - it perpetuates the problem. And then comes the salt in the wound!!!

Instead of voting on this thing on its merits - after all, we're only shelling out over 25% of the total budget for the upcoming year, what's a few hundred billion between friends, huh? - the wastes of flesh in the House and Senate have bloated it up with a veritable smorgasbord of pork in exchange for their support.

Here's a thought, gang! Have some stones. Grow a spine. Come somewhere close to having principles and standing on them. If this thing isn't good enough to vote for on it's own, it certainly doesn't magically get better by adding $192M in tax benefits for Caribbean rum producers.

I'm so glad that I dropped my party affiliation a while ago. I don't want to be associated with any of these people.

Quote: I didn't think I

Quote: I didn't think I could despise politicians any more than I already did... Ah, personal growth in action!