The first is from the 1979 TV special, John Denver and the Muppets: A Christmas Together. Just about everybody has heard this version at some point in their life or other. In fact, in most cases, I can't hear any version of this song without humming "ba-dum-bum-bum" to myself after the "Five Gold Rings" part. Yes - I am unashamedly a product of a misspent youth. I also think that most of life would be better if we all watched The Muppets more. Even [……]

Made up words and Freudian slips

It's amazing when a simple mistake just takes on a whole new meaning because of the context of the moment. We were playing a game with some friends last night and one guy gave the clue of "It's a type of salami."

His wife blurted out "Promiscutto" (we can only assume she meant this) but we laughed for the next 5 minutes. The made up word was humorous enough but coupled with the idea that it was about salami, it added a new level that we could pick on her about.

I stumbled across a link that showcases 25 Photographs Taken at the Exact Right Time. Some of them are humorous. Others are simply amazing. Still others are potentially painful in that vicarious, ouch-that's-gonna-leave-a-mark sort of way.

And then, as if that wasn't enough, from there I found 12 Excellent Examples of Great Time Lapse Imagery. Oddly enough, while I enjoy looking at the actual time lapse movies, my favorites are the still images of the tree and the city.

Tractor Square Dancing is one of those.

I live in the country but I've never seen anything like this.

Apple announced the other day that it would only accept credit cards at it's stores for iPhones. Plus, they are limiting purchases to two. And now, having apparently seen the loophole in this stunningly stupid and short-sighted policy, they refuse to accept their own gift cards for them as well.

They're saying that this is to, oh what was the phrase, "discourage unauthorized resellers." Which means they don't want people to buy some and sell them on eBay (a perfectly legal endeavor, btw) and they certainly don't want you unlocking the [……]

Life Takes Visa (for the Kiddies...) 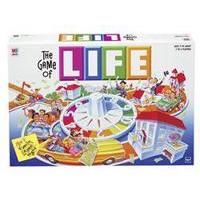 I know I'm behind the curve on this but, oh well. You get what you pay for, eh?

Seems that Hasbro has become the Junior Marketing Division of Visa with the latest version of The Game Of Life. Seems that the Twists & Turns Edition replaces cash with a Visa card.

This is on the relative heels of the new Monopoly Electronic Banking Edition which uses a Visa debit card in place of the cash. So much for using game play to reinforce your kids' math skills and teach them how to [……] 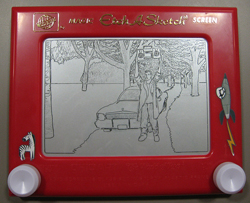 This stuff sure beats the hell out of the innumerable sets of stairs and lousy attempts at words that I did when I was a kid.

Kudos for this guy for taking the time to work this stuff out. Or maybe he just needs a date...

Plenty of idiots to go around

From right here in my lovely state comes this story in which people with absolutely no common sense are rewarded for displaying that fact for all the world to see.

The backstory can be found here so I won't repeat the entire thing. Read up on it if you wish.

Frankly, I don't care one whit whether McDonald's has to pay anybody anything or not. They're in for $7.2 million - frankly Jim Skinner sneezes more than that in a year. My issue is that the two plaintiffs in this case are idiots.

While I understand that company managers [……]

In a story that touches me on a deep, personal level, Mars, Inc. has announced that it does not support the proposal to redefine the legal definition of Chocolate and will not use any substitute ingredients in its manufacturing.

Thank you, Mars, for standing up for the quality of your product. Although that picture on your website with a package of M&Ms next to a bag of Whiskas is a bit disturbing...

How Far to The Point Of Know Return

For better or worse, the site is now live on the new CMS. No more double posting so there's no turning back. I'll be porting over the missing pieces in the next few days.

Please let me know if you experience any issues with this new setup. I haven't yet, but I don't actually read this thing... :-)