What do you get when you cross a popular children's toy known for the rearrangeable features of a native Idaho spud and a popular 20th century Spanish painter and sculptor known for rearranging some features himself?

Where the tuber meets the Cubist, you get Mr. Picassohead.

You need to check it out. While certainly a time sink, it's by no means your average, everyday time sink. You can view the images that others have made and then pump up your creative juices and "paint" your own. Here's what I kicked out in about a minute and a half.

Happy Birthday to Me!

Today marks the first birthday of Where's My Head? and aren't we all excited...

In that time, there have been 59 posts (pretty pitiful, really) and just shy of 17000 hits which is rather amazing considering that this is just a collection of my thoughts which won't be of interest to the majority of the world and that I've never done anything to advertise.

My blogging resolution for this year is to post more often, although that most likely means a lot more fluff. :-)

For the last couple of days, I've been playing with the HP SureStore DAT8e (e=external) drive that I was given so that I might actually be able to do backups of my all important data. Alas, I just found out that the drive is, in actuality, a SureStore DAT8eU (U=Unix).

So, no joy in Tapeville for me today since the machine that I really need it on at the moment is a Windows box. I guess I'll hang on to it for a while and play with it under Linux, but that means a whole new set of frustrations, as well [……]

Christmas has been odd this year

Well - here it is, December 23, and I've finally gotten into the Christmas mood. The reasons for the delay (it usually hits me about the end of the first week of December) are various, but the primary ones are easy.

I was just reading this post. I've said before, but maybe not on this site, that I fail to see any logical basis for the verdict of "not guilty by reason of temporary insanity."

Apart from the points that the good Doctor brings up, my reasoning is based more in self-preservation. The concept of "temporary insanity" just confounds me. Personally, I'd rather be walking down the street with someone who I know is a total wingnut than with someone who, according to those criminal defense lawyers, could apparently snap at any given moment and start hacking people [……]

Check out this story!

"They called us all together and said we would each get $1,000," Lawrence Wyman said. "Everyone started clapping and then they said it would be $1,000 for each year worked."

100 years of the airplane

Today marks the 100th anniversary of the Wright brothers' first flight. In my opinion, this was one of the 3 most world-changing inventions ever, along with the telephone and the computer.

I rather got a kick out of an article I read the other day by Thomas Sowell.) He opens like this:

[The airplane] was the work of a couple of young men who had never gone to college and were just a couple of bicycle mechanics in Dayton, Ohio.

Those were the words that Ambassador Paul Bremer used to announce that Saddam Hussein had been captured in an early morning raid just south of his hometown of Tikrit. 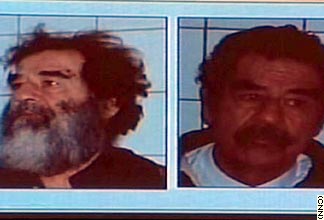 Operation Red Dawn involved about 600 US troops acting on good intelligence that a high level target was located in a specific area of about 2 square kilometers. They cordoned off the area and performed a search.

In what has come to be called a "spider hole" next to a small hovel, they found Hussein. He was with 2 other people, had 2 [……]

Welcome to autumn in Kentucky...

Like many other kids of the day, I learned how to solve the Rubik's Cube in the summer of 1981. Somehow, this knowledge came full circle this past week.

I learned how to do it while working at camp. My friends and I would mix it up and solve it time after time after time and the algorithm was so ingrained in our heads that we would often do the moves with our eyes closed after orienting the cube properly. We worked on full size cubes and the miniature keychain cubes. It got rather out of control. [……]